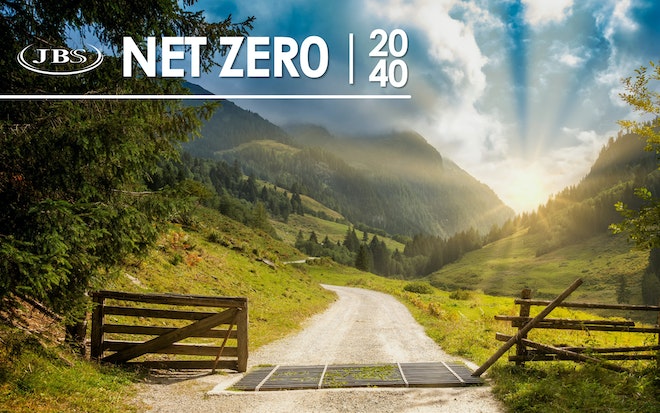 Commitment is a First for the Global Meat and Poultry Sector

JBS, one of the world’s leading food companies, today announced a commitment to achieve net-zero greenhouse gas (GHG) emissions by 2040. The commitment spans the company’s global operations, including Pilgrim’s Pride Corporation (Nasdaq: PPC), as well as its diverse value chain of agricultural producer partners, suppliers and customers in their efforts to reduce emissions across the value chain.

JBS is the first major company in its sector to set a net-zero target. The ambition reflects the company’s goal to meet the health and nutritional needs of the growing global population in a sustainable manner that preserves the planet’s resources for future generations. As part of its commitment, the company has signed on to the United Nations Global Compact’s Business Ambition for 1.5°C initiative, which aligns with the most ambitious aim of the Paris Agreement to limit global warming.

“Climate change is the great challenge of our time and we must act urgently to combat the negative effects of global warming,” said Gilberto Tomazoni, JBS global chief executive officer. “As one of the most diversified global food companies, we have an opportunity to leverage our scale and influence to help lead a sustainable transformation of agricultural markets that empowers producers, suppliers, customers and consumers. Agriculture can and must be part of the global climate solution. We believe through innovation, investment and collaboration, net zero is within our collective grasp.”

The company will develop GHG emission reduction targets across its global operations and value chains in South America, North America, Europe, the U.K., Australia and New Zealand. JBS will provide a time-bound roadmap that provides interim targets consistent with the criteria set forth by the Science Based Targets initiative for a 1.5°C trajectory. The company will also provide annual updates on progress to ensure transparency and disclose its financial risks linked to climate change, in line with the Task Force on Climate-related Financial Disclosure (TCFD) initiative.

To accomplish its net-zero goal, the company will adopt several strategies to achieve reductions in emissions, including:

The company’s announcement is a continuation of its longstanding commitment to sustainability and ongoing efforts to reduce emissions. In Brazil, JBS currently monitors 100% of its direct cattle suppliers for illegal Amazon deforestation and is leveraging blockchain technology to monitor the suppliers of its suppliers. In North America, JBS operations have reduced GHG emission intensity by nearly 20% since 2015. In the UK and Northern Ireland, Moy Park has reduced CO2 emission intensity by more than 77% since 2010, and Pilgrim’s UK previously committed to net-zero emissions by 2040

JBS is the world’s second-largest food company and the largest animal protein producer. With a global platform diversified by geography and products, the company has more than 245,000 team members in South America, North America, the United Kingdom, Europe, Australia and New Zealand. JBS offers an extensive portfolio of brands recognized for excellence and innovation, including Swift, Pilgrim’s Pride, Seara, Moy Park, Friboi, Primo, and Just Bare, which are enjoyed by consumers in more than 190 countries around the world every day.