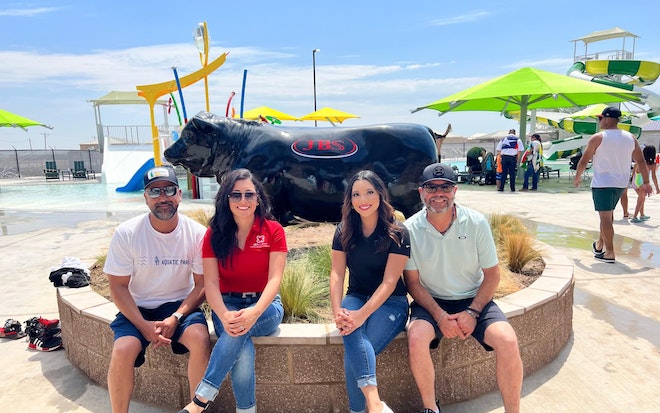 JBS USA is providing an update on how its Hometown Strong funds are being invested in Cactus, Texas. The company has worked closely with local leaders to identify how best to meet immediate and longer-term community needs.

Of a $3.3 million initial investment in Moore County, JBS USA contributed $500,000 to construct the Cactus Aquatic Center, a state-of-the-art public aquatics and recreational facility, for the community.

JBS Cactus hosted a grand opening of the aquatic center on Sun., July 3, officially welcoming more than 200 community members ahead of Independence Day.

“We are proud to partner with City of Cactus and Texas Parks & Wildlife to bring this amazing resource to the community,” said Manny Guerrero, JBS Cactus General Manager. “We had a fantastic showing at our grand opening, and it is our hope that the Cactus Aquatic Center will serve our team members and neighbors for many years to come.”

In addition, the company has funded the below Hometown Strong projects to date:

Furthermore, a Hometown Strong investment of $8 million is also being allocated to develop affordable housing in the area. To date, 128 lots have been approved for development in Dumas and Cactus.

The JBS USA Cactus beef production facility employs nearly 3,300 people with an annual payroll of more than $140 million. The facility supports more than 50 producers, paying them more than $2 billion per year for their livestock.